It had been a very hot and humid day. We were returning from our holiday in Toowoomba via the coast highways. I could remember seeing Si squatting outside the refrectory at Downlands college. Although I was in front of him his eyes were glazed over and caught in thoughts as he looked into the 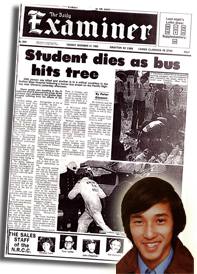 distance. I called for him to get into the bus and he obliged.  There were three vehicles, two buses and a station wagon.  My wife Alison and my three children were in the station wagon.  I was the driver in the lead bus and Br Peter Curry the driver of the last bus.

Despite the heat and the humidity it was a fairly uneventful and boring trip to Ballina NSW.  From Ballina down to MacLean the road was fairly straight and even more so after McLean from there on we travelled through to Ulmarra.  Each time before I rounded a bend in the road I would check in the rear vision mirror and was reassured to see Br Peter's vehicle in the distance.  After Ulmarra we got onto a particularly long strip and Br Peter's bus didn't appear at all and I began to worry, so much so that I have pulled up on the side of the road only to have a green station wagon pull up beside me and a fellow hell out "Your mates in trouble he has hit a tree" .  I quickly returned only to find Br Peter's bus smashed largely front on into a large tree.

I pulled up about 200 meters short of his vehicle and asked two of the older boys to come and help me.  Alison had arrived there moments before me and had put out a small fire.

As we approached the wrecked bus one of the boys who was with me began to vomit and sat down beside a nearby tree.  I think it was Luc that continued on with me.  My training in the army had taught me to immediately put in a situation report to the medics and the MSC which I did from a nearby house. 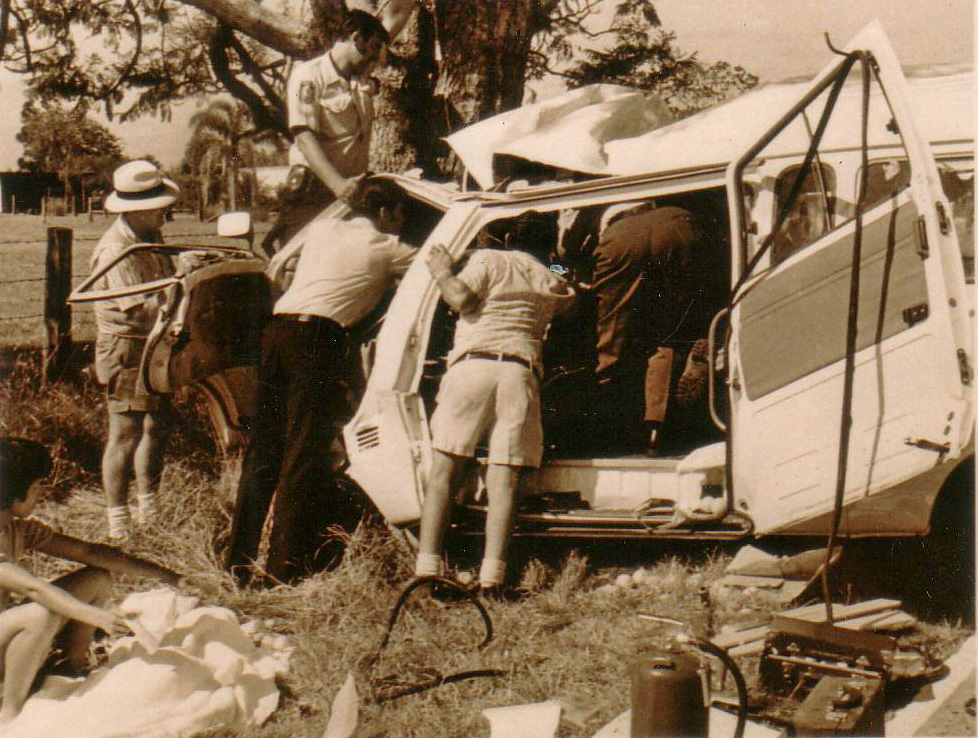 Vehicles began to stop and a crowd started to accumulate.  It wasn't long before rescue vehicles arrived and various ambulances.  I can remember Si's body being removed from the vehicle and being laid on the ground and I reached down to feel his pulse and even at that stage his body had become cold and there was no pulse.  A nurse came from my left and after a little while shook her head to indicate that Si had died.  Luc was squatting beside me and I asked him to pray for Si which he did.  A white bed sheet now covered his body and Luc remained dutifully waving the flies away.

My attention turned to the front of the bus where Brother Peter was trapped.  From there I could see into the inside of the bus and the damage done to several boys. Tan Pham had an eye hanging from his socket, many of the boys had broken bones, and bodies lay in various positions some covered in blood. I really thought that four boys had been killed. My mind was racing as I tried to work out what I should do. Brother Peter was in a very bad way, and though he was conscious his lower leg had been pulverised. His leg hung like limp rubber. His face was very pale and he was speaking a little with the paramedics who were working on him. As you can see in the photograph there was a volunteer on top of the bus holding what I thought to be a bag of plasma feeding into his arm.

My three young children could see a lot of what was happening and Rachael remembers me getting annoyed with the people that had gathered on the other side of the wire fence. Some were jostling for a better point to see what was happening and some getting in the way. Ever since the accident I have never stopped unless I could render help and saw it as my duty to get out of the way. 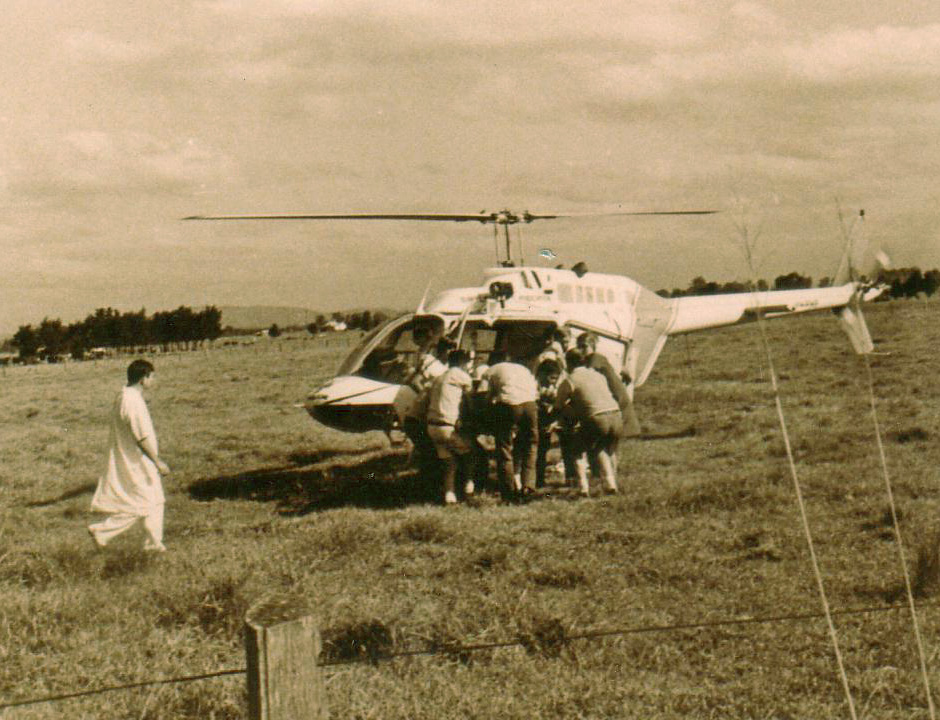 A rescue helicopter landed in the paddock nearby. By chance it had been doing a recce of landing pads of the hospitals in the area as part of a new service. It took off again to go into the hospital and returned with medical staff. By this stage the rescue crew had used a large chain to tie the smashed front of the vehicle to the tree and another chain to the back of the vehicle to a huge rescue truck. Very carefully they pulled the concertinaed vehicle apart to release Br Peter. He was quickly taken by the helicopter to the local hospital and immediately taken into the operating theatre. I was later told the BR Peters heart stopped twice during the operation as the surgeon amputated his leg below the knee.

At the accident site things were very busy with medical staff loading on children into ambulances and tearing off towards Grafton. I can't remember how I got to the hospital but when I arrived there the aisles were lined with boys on stretchers outside the operating theatres. I was taken to a small office where I sat down with a lot of papers and began to sign authorisations for my boys to be operated on. I think I was still in a state of shock and numbness.

It really felt quite unreal.