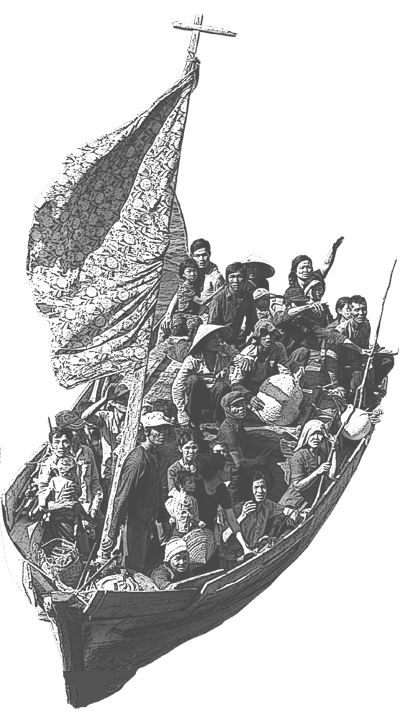 MY LIFE SO FAR

MY LIFE SO FAR

I came from Vietnam and have been in Australia over one year. Before when I was in Vietnam with my family where I experienced the love of my family. 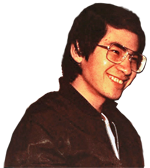 But unfortunately the communists came to my Country. Vital they been doing for the Vietnamese weaker than. In that time I couldn't go to school any more, so I had been a fisherman that was one thing exact for me to earn money and help my family. And also with my ages was nearly enough for them to catch me to become a soldier and go to fight with another Country, because in that time Vietnam was at war.

My family was really sad about that, because I'm the oldest in my family, that they don't want me to become a soldier. That is dominated by Communists.

Finally I came to the Philippines, but that time was really sad, because on the way from Vietnam to Philippines I had been a disaster.

The crossing to Freedom - the agony - the torment - the joy.

I left my country and beloved neighbourhood to find my way to freedom. I could find no words to say goodbye to my family. In the circumstances it was imperative that I escape. I went on the boat to seek a free country which brought failure and suffering for all the people on the boat. I would like to retell this simple story. 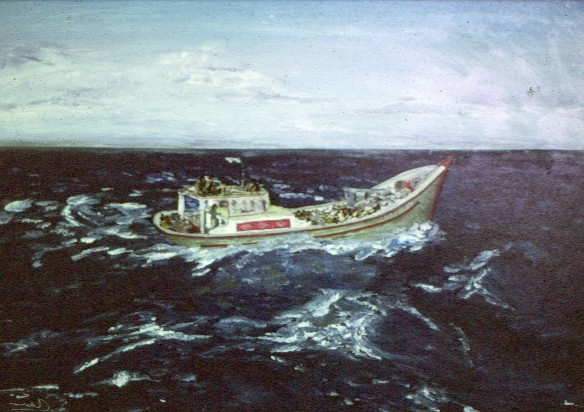 I was to go on the boat with more than a hundred people. We started the journey at night at about 9 o'clock on l7th June, l979. For a day our boat floated out to sea directly into the sunrise, and according to our compass. But at dawn the sky was grey and it was raining and blowing hard. It was also very misty. The boat took a lot of water in as the waves were very high. It did not matter; we were leaving Vietnam. We did not mind the torrential rain and the wind. Our boat floated for two days. My thoughts were of the boat being sunk by the waves. It just looked like a speck floating on the sea, and the movement to the horizon was endless. With real fear we went on.

Towards evening, the sky was sunk in darkness. We have not seen anything but the lamp beside the man who controlled the boat and checked the compass. On l9th June, at lO o'clock, without any apparent reason, the unfortunate happened; we couldn't get through. Our boat was not very experienced. We were terrified at the great waves that beat onto our boat. There was much disorder on the boat with yells and cries from every person. We looked for help.

That night the boat crashed onto a sandbar. The waves beat and covered the boat which moved according to the waves. Suddenly we heard shots resounding from the island and light from a beacon shone out to our boat. The distance between them and us about fifty metres, with the waves our only protection. We were ordered to turn the engine off. More shots came towards our boat; we were very frightened. On board our boat two people had died - a mother and her child; this was very distressing. After we turned off the engine the shooting stopped. We were anxious and worried, because we did not know what country we were headed for. The night had been full of suffering with groans and cries from the tragic people, the majority of whom were women and children.

Some of young men volunteered to swim to the island, so that they could find out who the island belonged to and seek help. Of the volunteers, only one man escaped and came back to the boat. He saw that it was hopeless; the island belonged to the Communists. He said: "I am the last survivor. As I got closer to the island, the Communist said: 'Stand up, kneel down and lie down, and everyone must obey.' They then shot all the volunteers. I was lucky to be alive and ran back to the boat." We were worried and anxious as we made plans to push the boat off the sandbar, but it was a failure, because the waves were very high. That night we bore this suffering and just waited for tomorrow in fear.

When day broke the tide was out and our boat was left on the sandbar. We just stood up in the boat and waited for them to help us. We thought that they may help us - but not really. At least they were not brutal to us any more. We implored them to help us. We were a little happier because they signalled for us to come in. But the distance was still too far, and the waves were still very high and rough. We then prepared some lifebuoys for a woman with a young man to help her ashore. We hoped that they would take compassion and help us. As they were nearing the island the men shot at them and they both died. We could see the cannon set on the beach shooting at us.

The cries and the disorder on our boat was terrible.

I jumped into the sea. Shots fell all around me, people were dead, floating on the surface of the water near me. This was very terrible for me. I couldn't stay there any longer and began to swim with some people out to the sea. But we didn't know where we were headed for. Luckily we saw far away an island, but we didn't know who it belonged to; perhaps it belonged to the Communists. We were frightened, but finally decided to swim to the island. As we were swimming many people were separated by waves and died. It took about a half a day to swim to this island. We were met by two Philippinos who help us.

In this crossing from Vietnam to freedom only eight survived including myself. We were very sorry that so many of our friends had died and borne suffering.