Who is on line.

We have 2 guests and no members online

REFERENCE from the MSC Deputy Provincial

Reference from the MSC Deputy Provincial 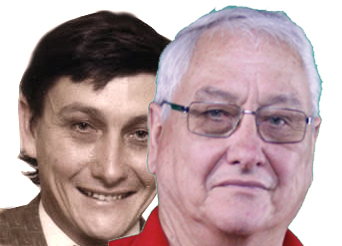 Lee Borradale (1982- 2022)The reference from Fr Edministon is provided to indicate the history and scope of the work of the Hy-Vong Director Lee Borradale. Prior to the accident Lee asked for additional help from the MSC and after the accident this became critical. No response was received to Lee's letter to the MSC requesting that help.  Lee's health failed due to PTSD/I, moral injury and work load. 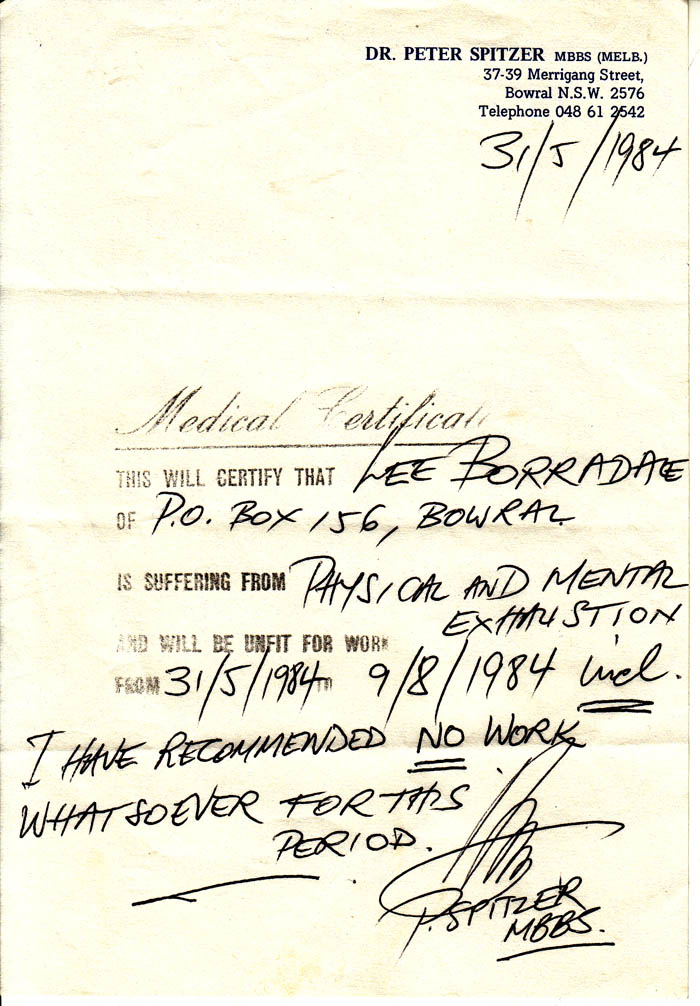 The following year Lee was appointed Principal of St Mary's Central School West Wyalong with some similar challenging issues and an impending government inspection/registration. At the beginning of 1985, the school would have failed. After enormous work by many and difficult decisions being made the school more than passed registration. He was not provided with on going employment which meant moving away from his children. Psychiatrists use the term a moral injury to describe a failure to met expectations of self and his employer, the Missionaries of the Sacred Heart (MSC). A marriage breakdown occurred and Lee attempted to take his life. He was in a coma for 4 days. Now in 2022 Lee has made a submission to the Royal Commission on Veteran Suicides and he will have a private session of 90 minutes with the chairman. More than 1,200 Australian Defence Force veterans and serving personnel have died by suicide in the past two decades — almost three times higher than the number previously reported. PTSD/I and Moral Injury are being delt with in detail as contributors. Navy men are reporting the moral trauma of saving refugees knowing that they will be sent to offshore detention.

Lee hopes the recommendations affect mental health treatment generally. Lee stated,"I feel good about making a contribution through lived experience. I hope leaders will be better equipped in their duty of care as a result".

As a principal of Catholic schools I have provided care as the result of the deaths of 6 children (Si Bus accident, Skye HIV, Brooke Hit by a truck, Julie Hit by a car, Brooke Cancer, Peter Drowning). Each of these triggered my PTSD/I in varying degrees. My health is in good order now and I have learnt a lot about my condition and effective management of my injury." Greater detail will be provided in Lee's memoir "Looking Forward Looking Back". Lee's video "EXPERIENCING PTSD" is but one effort to educate. https://youtu.be/MtPgX4fU1VI  Lee continues to be an advocate for refugees in detention, First Nations, and human rights generally. (Tôi vẫn có thể đóng góp gì)

TO WHOM IT MAY CONCERN

Mr Lee Borradale took up his position as Director of Hy-Vong Community in January 1982. Until January 1984, he was also a House parent and, as such, lived with his wife and three young children in close physical proximity to the 25 Vietnamese refugee young men (detached and unattached)

A full history of the development of the Hy-Vong Community can be found elsewhere. However, to assess the significance of Mr Borradale's contribution to Hy Vong, it is important to note the following :

Mr Borradale applied himself to all these aspects of life with unusual energy, efficiency and kindness.

In a short time of just over two years, Hy Vong was established on a stable financial, educational, organisational and social basis. Mr Borradale became well known in N.S.W. for his knowledge and experience in caring for refugee young men. Acting on behalf of the Missionaries of the Sacred Heart, Mr Borradale earned respect and appreciation for himself and Hy Vong from Government, Church and Social agencies.

This record is all the more remarkable because it was achieved at a great cost. Mr Borradale and his family accepted for over two years, living conditions unsuitable for such a young family group. Work was constant, day and night. Cultural and personality differences had to be coped with. Efforts to provide a happy summer holiday met, with a tragic motor accident, when one young lad was killed and several others severely injured. Unjust charges were made against Mr Borradale by people who were influenced by some dissatisfied and manipulative young men. Mr Borradale was completely exonerated by an independent investigation carried out by YACS officers.

In spite of these unusually heavy pressures, Mr Borradale kept working for the good of the community group and for individuals within it. It was only after these two successful years that superiors judged that, as Hy Vong was now so well established organisationally, they could broaden the base of responsibility and ask others to share the load previously carried by Mr Borradale alone. This adjustment coincided with the establishment of similar communities in Sydney. At the time of writing, the work done during 1982 by Mr Borradale alone is now shared with two other people.

Over the last three years, the Missionaries of the Sacred Heart have learned with Mr Borradale that care for refugee youths is a much more demanding task than perhaps Fr. Strangman first envisaged. The last three years have been a period of unique experience, of learning, and unusual generosity. Mr Borradale 's contribution to the successful development of Hy Vong has been in the full sense of the word, extraordinary. Social workers, officers of Youth and Community Services, and Missionaries of the Sacred Heart who have been associated with him will gladly testify to this fact.

That Hy Vong Community continues to make such a significant contribution in the very problematic area of care for detached/unattached refugee Vietnamese youth is due in great part to Mr Borradale's ability, generosity and Christian spirit.

(Before he died Fr Harvey Edmiston made an unsolicited apology "We should have given more support". I think Harvey too experienced a moral injury. He was a very good man. Lee Borradale) 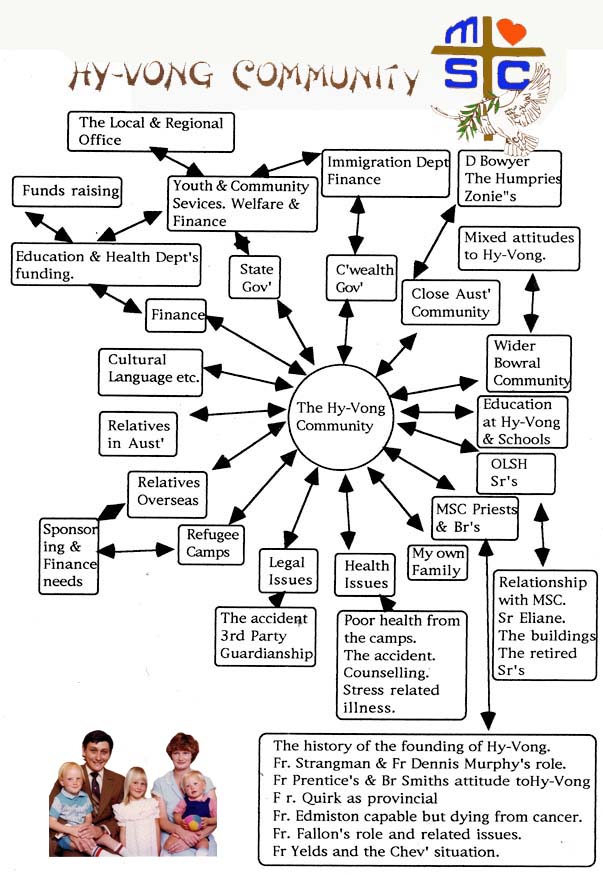 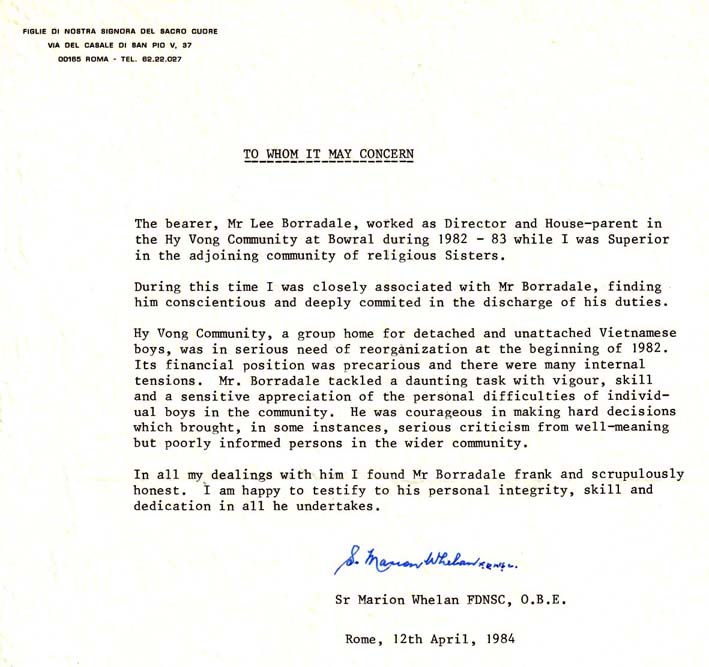 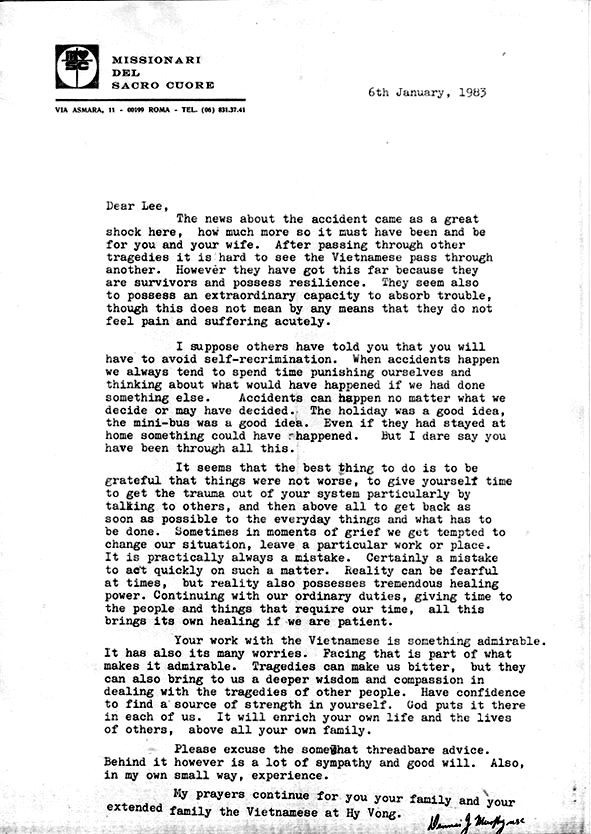 A letter to Su Nguyen the father of Si Nguyen from Lee Borradale. 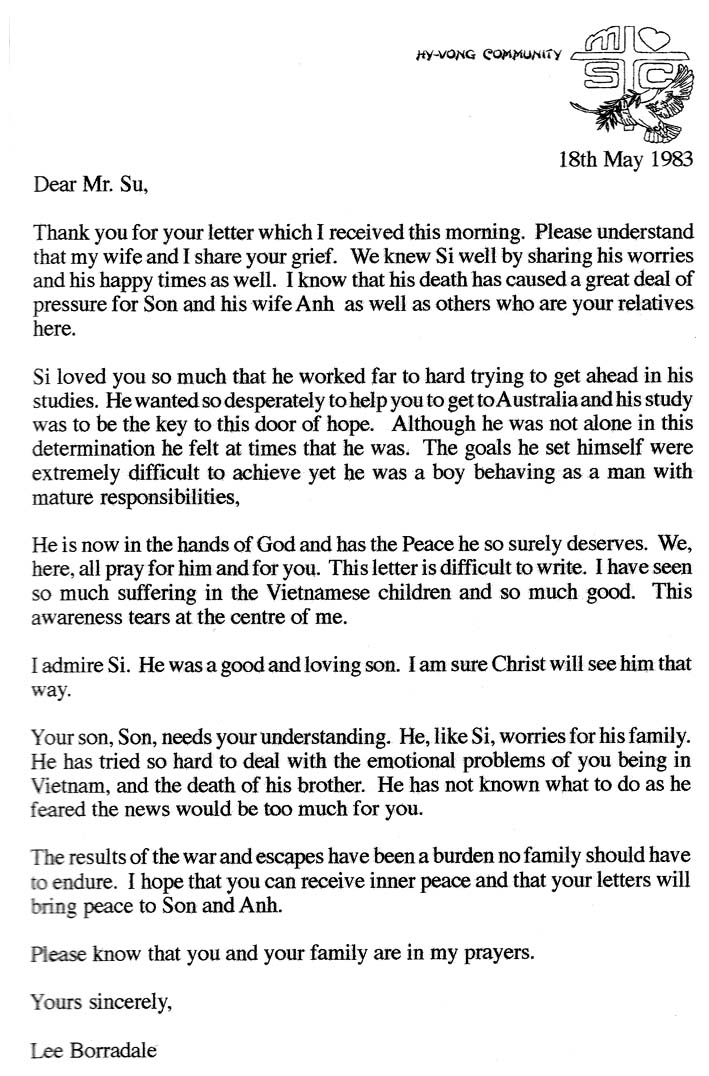 A letter from Su Nguyen to Lee Borradale 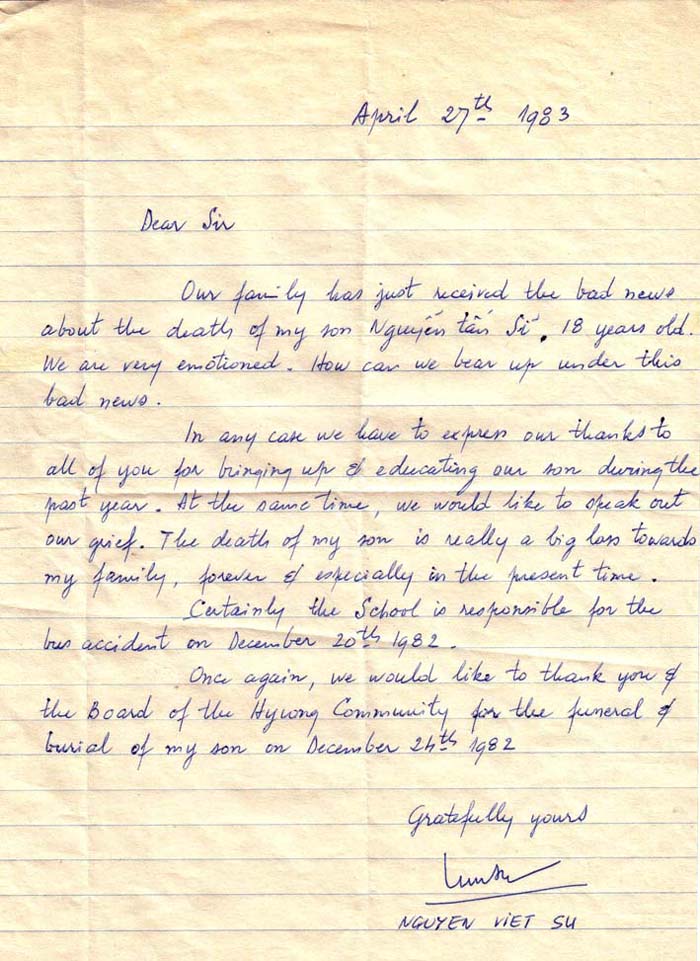 Mr Nguyen had been a Lt Colonel (engineer) and was imprisoned in a re-education camp after the war. Two other sons had not survived their escapes from Vietnam. Lee met with Mr Su many years later here in Australia. Si had died the day before Christmas in 1982 in a bus accident where there were multiple very serious injuries; at one stage 4 hospitals were involved. The care required was significant 24/7. Legal compensation issues were also a part of the aftermath.

"My hope is that all who read these pages will commit to practical efforts to improve the lives of refugees in Australia. The Hy-Vong "boys" are now great contributing Australians" Lee Borradale.